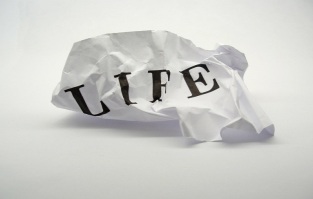 Several years ago I bought my dad a Play Station for his birthday. We bought some games and, because it meant something to my dad, I would play games with him. Over time I began to understand how these games worked. For example, one time my dad and I were playing a game and we got stuck. We didn’t seem to know what we needed to do to progress to the next level. My dad wanted to explore around a bit, but I knew that there was only one area we needed to go. I knew this because this was the only area where people were shooting at us.  Ironically, the way the game writers communicated that we were going in the right direction was the fact that there was conflict.  The places of dead quiet were dead ends.

Not long ago it occurred to me that this applies to our lives as well.  We are experts, at least I am, of choosing the path of least resistance and feeling that if everything is going smoothly then we are on the right path. What if we are wrong about that?  What if the paths that include conflict are actually the ones that lead us to new levels?

Henry James, a American realist writer who focused on the subtleties of personality, wrote a story called “The Beast in the Jungle” about a man who has a foreboding feeling that his life will include some great tragedy, although he has no ideas what it is.  He is able to find a companion who is willing to wait with him and observe how this enfolds. His life passes uneventfully with his companion, a woman, developing a friendship but nothing more. Because of his fear, he is unwilling to pursue any deep relationships. Finally, at the end of the story his friend tells him she is dying and that she knows what his tragedy is but cannot tell him. She stands before him hoping he will understand what it is, but he’s too clueless to get it. Finally, she dies and he feels sad but mainly mourns the loss of someone whom he felt understood his plight. One day, while visiting her grave, he observes a man grieving intensely at a grave. When the man walks by, he catches a glimpse of his face and he is undone by such extreme misery. Immediately, he understands something. He has never felt that strongly about anything. His tragedy is that he has never cared about anything in a passionate way. He has never loved. Having never sacrificed for anyone or anything, he has wasted his life.

In a more direct way, Jesus warns us about wasting our lives: “And he said to all, “If anyone would come after me, let him deny himself and take up his cross daily and follow me. For whoever would save his life will lose it, but whoever loses his life for my sake will save it. For what does it profit a man if he gains the whole world and loses or forfeits himself?” (Luke 9:23-25 ESV)

Jesus asks a good question: what’s the point in living a life for ourselves only to arrive at death and lose everything? What if we live a life of collecting toys and memories only to realize, in vain, that we’ve squandered our lives?

Christine Caine once said that the point of life is not to arrive at death safely. When I first heard that quote, it totally floored me. I am a cautious person and not a risk taker by any means. But why? So one day I can make it to death without scars? Accomplishing nothing but having avoided suffering?  The absurdity of this idea overwhelms me with its simple truth. Our lives here are short and limited. Because of this, it is imperative to make sure we are spending it on that which is eternal. That which will count. And what exactly is eternal?

Not even my experiences.

And if I risk it all, pour it out on the altar of eternal precious souls, I can know that it will all be worth it. What I will have lived out on this side will transfer over into the new kingdom. One built, not with dead stones, but living stones.

Because that’s how we are here today.  The blood poured out on the altar of time was shed for us, for our faith:

To all of them, I am grateful.

“Therefore, since we are surrounded by such a great cloud of witnesses, let us throw off everything that hinders and the sin that so easily entangles. And let us run with perseverance the race marked out for us, fixing our eyes on Jesus, the pioneer and perfecter of faith. For the joy set before him he endured the cross, scorning its shame, and sat down at the right hand of the throne of God.”  (Hebrews 12:1-2 NIV)

What will be my legacy?  How will I be a part of keeping the stream of liberating truth available to the world?  It will be hard.  It will take everything I have.  But the alternative is unacceptable.

Recently John Piper published an article called “The Unwasted Life” where he targets the Baby Boomers and their view of their retirement years.  Motivated by the fact that three of the presidential candidates are in their 70’s, Piper says the following:

So if Hillary and Bernie and Donald want to bear the weight of the world for the next four to eight years out of man-centered, philanthropic motives, I find my seventy-something zeal for Jesus heating up. They only get to be president of a tiny territory called the U.S.A. I get to be an ambassador of the Sovereign of the universe. They only get to change the way some people live for a few decades. I get to change the way some people live forever — with a lot of good spill-over for this world in the process.

We have eternity in our hands—let us not take the quiet, dead paths, but let us boldly walk the lanes with the “clouds of witnesses” before us, not hiding from the risk.