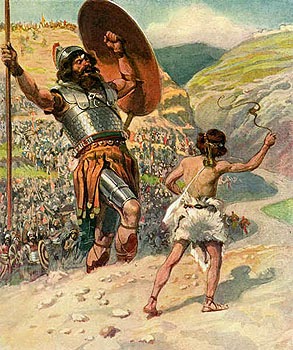 “I will love You, O Lord, my strength.  The Lord is my rock and my deliverer; My God, my strength, in whom I will trust; My shield and the horn of my salvation, my stronghold.  I will call upon the Lord, who is worthy to be praised; so shall I be saved from my enemies.”  Psalm 18:1-3

David penned this psalm “on the day that the Lord delivered him from the hand of all his enemies and from the hand of Saul.”  This entire psalm is found in 2 Samuel 22:1-51, and the preceding chapters (and the context for the psalm) speaks of the death of Saul who had been trying to kill him for some time and (many years later) David’s victory over the Philistine giants (the family of Goliath).  As you can imagine, these were pretty important events.

As a quick recap, David was the youngest of seven sons.  He was a shepherd and musician who spent most of his days out in the wilderness protecting sheep.  That is until the Philistine Goliath showed up–a nine foot, well-trained soldier who laughed and taunted the Israelites and their God demanding that they send forth their own champion to challenge him.  The Israelites were paralyzed with fear.  David came on the scene and was shocked that the Israelite people would allow this uncircumcised man to mock their God.  David’s mind was full of the remembrance of the deeds of God both in the past and in his own life.  He knew that God would show up once again for His name’s sake.  The Israelites, however, looked at this situation and forgot all that happened before and were terrified.  We all know the rest of the story of how David forsook the conventional form of protection (namely armor and a sword) and instead approached Goliath with faith and some rocks.  In a matter of moments, the giant that had plagued them was conquered and beheaded.  This mighty feat brought David into the limelight and soon King Saul had David as a part of his royal retinue.  The hand of God upon David was obvious, and he was successful in all that he did; it wasn’t long before Saul’s admiration turned to envy.  For eight long years, Saul pursued David and tried to kill him while David hid out in the mountains with those who would follow him.  Many times, David had the opportunity to end the struggle and the hiding and the running.  But David refused.  Was he weak?  Was he foolish?  No.  He respected God and His anointing so much that he would not, could not, touch a man who had been anointed by God to be king.  Not even to save his own life.  In the end, it would be the Philistines who killed Saul, and David would mourn his loss.  2 Samuel 21 brings us forward many years.  Years in which David has made decisions that hurt many people–decisions that brought death to the innocent, that brought chaos to his family, that brought shame to his home.  He comes full circle in this chapter to face giants again–the family of Goliath–but this time he needs help; in four separate battles both David and his men fight and kill the remaining the men of Goliath’s family.

I find it interesting that David’s psalm of praise includes the deliverance from the hand of Saul even though that had happened many years previous to the victory that he just experienced.  I think its telling that David was so good at keeping close the memory of all God’s deliverances in his life and not just the ones that happened recently.  Perhaps it was this ability that enabled David to wait the eight long years of his exile with hope and not impatience.  He knew that he knew that he knew that God would move on his behalf because he’d seen it before.  He could wait because he knew he wasn’t forgotten. Let’s look again at the opening lines to his psalm:

“I will love You, O Lord, my strength.  The Lord is my rock and my deliverer; My God, my strength, in whom I will trust; My shield and the horn of my salvation, my stronghold.  I will call upon the Lord, who is worthy to be praised; so shall I be saved from my enemies.”  Psalm 18:1-3

When he thought of the Lord, the following words came to his mind: love, strength, rock, deliverer, trust, shield, salvation, stronghold, saved.  David responded to the victory he experienced by recognizing who was behind the victory.  He put his thoughts into words–words that would later even be used by future worshippers to use in their own times of thanksgiving.

What words come to your mind when you think of God?  Are they words like David’s or instead do you get words like duty, expectation, disappointment, restriction, even fear?

I think a lot of our difficulties with God comes from a lack of understanding of His heart.  You see, David blew it big time, and on many occasions, and yet he never let this keep him from coming to God again and again.  And on those occasions when he was called out for his sin, his immediate response was humility and repentance.  I think it’s because he really got God’s heart for him.  He even saw God’s heart for Saul which was why he refused to intervene.  When we understand God’s loving mercy towards us, it is then, and only then, that we can offer that same mercy towards others.

“Great deliverance He gives to His king, and shows mercy to His anointed, to David and his descendants forevermore.”  Psalm 18:50

1) Our confidence in God is best reinforced when we continually remember God’s work in the past in our lives, in the lives of other believers, and in the Bible.

2) We need to reaffirm our confidence in God with words.  Don’t just think it–say it!

3) We are able to show mercy to others (in other words give people the time to be dealt with by God) when we realize how much mercy we are receiving.