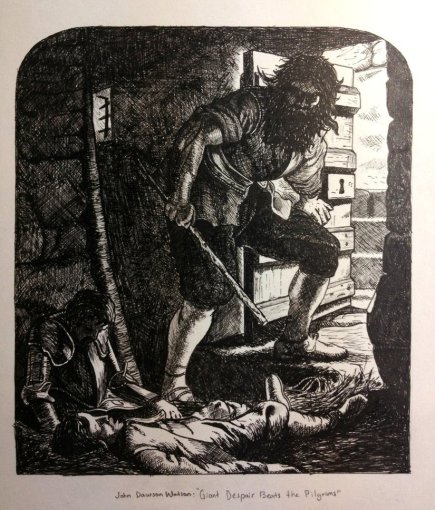 On New Year’s Eve, I read several memes and posts about how happy everyone was to see 2016 be done with.  The hope was that 2017 would be a better year without the division and bloodshed that we have witnessed.  For my own reasons, 2016 has been a challenge–a pathway through a darkness that has not been easy to navigate.  But this is life, isn’t it?  Isn’t so much of what we encounter not what we planned for?  Certainly not what we hoped for.  And yet, here we are–in the midst of a scene we are sure the director never intended.

One year while teaching John Bunyan’s Pilgrim’s Progress, I was particularly moved by a scene that was chilling in its accuracy.  The story, written from prison, is an allegory following the journey of Christian to the Celestial City.  He encounters friends and foes along the way and makes both wise and, not so wise, decisions.  It’s meant to communicate the spiritual journey of those who have chosen Christ.  The path is anything but tame; instead, it can be scary, dangerous, and challenging.

In one particular scene, Christian is traveling with his good friend Hopeful.  In order to take a shortcut, they bypass what they think is a difficult path only to find themselves trapped in enemy territory.  While there, they are captured by Giant Despair on whose property they have trespassed.  He brings them back to to his home, locks them in a dungeon “so foul and stinking to the spirits of these prisoners.”  Giant Despair then alternately starves, beats, and taunts the poor men.  After beating them brutally, on the advice of his evil wife he begins to encourage them to take their lives which they seriously consider.

Hopeful is able though to dissuade Christian saying that perhaps there is another way out, and they should maintain hope.  Giant Despair, seeing that they had not taken his advice, plots how best to break their spirits.  But while he makes his plans, Christian remembers something that he had completely forgotten about–a gift given to him by the King himself:

Well, on Saturday about midnight the prisoners began to pray; and they continued in prayer until almost the break of day.  Now a short while before it was daylight, Christian, like someone suddenly amazed, broke out with a most passionate exclamation. “What a fool I have been, to lie like this in a stinking dungeon, when I could have just as well walked free. In my chest pocket I have a key called Promise that will, I am thoroughly persuaded, open any lock in Doubting-Castle.” “Then,” said Hopeful, “that is good news. My good brother, do immediately take it out of your chest pocket and try it.” Then Christian took the key from his chest and began to try the lock of the dungeon door; and as he turned the key, the bolt unlocked and the door flew open with ease, so that Christian and Hopeful immediately came out. Then he went to the outer door that leads into the Castle yard, and with his key this door also opened. After that he went to the  iron gate for that needed to be unlocked as well. Now this lock was damnably hard, yet the key did eventually open it. So they thrust open the gate and made their escape with great speed.

Being an allegory, many of the elements are symbolic of actual things we might encounter as believers.  Here Bunyan, who was well acquainted with despair, explains the entry way and escape from this terrible giant’s domain.  At first, because Christian and his friend sought an easier path, they were made susceptible.  This is a warning to us Christians because the path laid before is anything but simple.  We wander into dangerous territory, giving the enemy a foothold in our lives when we see the easy path.  Once there, they were at the mercy of the Giant Despair.  For those who have been in the terrible clutches of fear or hopelessness, it is not difficult to relate to their times in the dungeon–trapped without hope of rescue and suffering greatly.  I have been here.  I too have wanted to give up.

But the glorious moment was still ahead.  Christian remembers that he hasn’t been left without hope, but he has been given a key– a promise.  This promise is the Word of God and is the key that breaks us out of the pit of doubt and fear.  These are promises that God is at work and that even this present suffering is not meaningless.  When they grasp this promise, they are then free to escape the Doubting Castle.  They emerge into the light, broken but no longer bound.

We too can grasp this key–this hope of God’s restoration and be freed from our own fears.  There is nothing easy about this decision because laced with hope is the terrible fear that the key will not actually work.

The final scene of Christian and Hopeful’s escape contains a vivid reminder:

But as it opened, that particular gate made such a creaking sound that it awakened Giant Despair who, hurriedly arising to pursue his prisoners, suddenly felt a paralysis come over his limbs, for his seizures came on him once again so that it was impossible for him to chase after the escapees. Then Christian and Hopeful went on till they came to the King’s highway once again, and here they were safe because they were out of the Giant’s jurisdiction.

Note that as they tried to escape, they were pursued.  However, Giant Despair is hindered from catching them, and soon they are out of his jurisdiction and are well and truly free. While the steps leading up to this moment depended on Christian and Hopeful’s faith and action, this one was completely out of their hands. God showed up in a surprising way to make the way clear.  We must remember that we are not in this by ourselves.  There is a part for us to play–we alone can fit the key into the lock.  However, we must trust the giver of the key to make the way clear when we cannot.  Perhaps this is the bigger act of faith because it is the part we have no control over.

We are well into 2017 now without any hope of it being a much better year than last year.  However, we are not discouraged because we can trust that our God is at work.  “For all the promises of God find their Yes in him. That is why it is through him that we utter our Amen to God for his glory.” 2 Corinthians 1:20 ESV