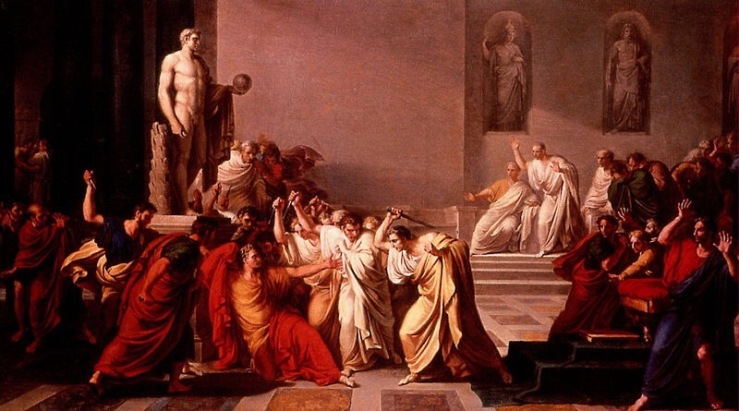 In a famous scene from Shakespeare’s Julius Caesar, Antony has stirred the crowd up to a frenzy against the conspirators who assassinated Caesar. In their rampage, the crowd (or mob at this point) comes across Cinna the Poet who unfortunately shares the name of one of the conspirators. Read the following scene:
Third Citizen Your name, sir, truly.

CINNA THE POET Truly, my name is Cinna.

First Citizen Tear him to pieces; he’s a conspirator.

CINNA THE POET I am not Cinna the conspirator.

Fourth Citizen It is no matter, his name’s Cinna; pluck but his

name out of his heart, and turn him going.

to Brutus’, to Cassius’; burn all: some to Decius’

The chilling lines from the fourth citizen captures the evil of the mob mentality. When they realize that Cinna is not in fact Cinna the conspirator, the citizen calmly says, “It is no matter, his name is Cinna.” In this scene, truth is irrelevant, only the satisfaction of the emotionalism of the mob. They want revenge, and anyone will do. We see a similar scene played out in the pages of Scripture as Paul shared the Gospel.

“Now when they had passed through Amphipolis and Apollonia, they came to Thessalonica, where there was a synagogue of the Jews. And Paul went in, as was his custom, and on three Sabbath days he reasoned with them from the Scriptures, explaining and proving that it was necessary for the Christ to suffer and to rise from the dead, and saying, ‘This Jesus, whom I proclaim to you, is the Christ.’ And some of them were persuaded and joined Paul and Silas, as did a great many of the devout Greeks and not a few of the leading women. But the Jews[a] were jealous, and taking some wicked men of the rabble, they formed a mob, set the city in an uproar, and attacked the house of Jason, seeking to bring them out to the crowd.” Acts 17: 1-5 ESV [bold and italics mine]

However, things are different when they get to Berea.

“The brothers immediately sent Paul and Silas away by night to Berea, and when they arrived they went into the Jewish synagogue. Now these Jews were more noble than those in Thessalonica; they received the word with all eagerness, examining the Scriptures daily to see if these things were so. Many of them therefore believed, with not a few Greek women of high standing as well as men. But when the Jews from Thessalonica learned that the word of God was proclaimed by Paul at Berea also, they came there too, agitating and stirring up the crowds. Then the brothers immediately sent Paul off on his way to the sea, but Silas and Timothy remained there.” Acts 17:10-14 ESV
What happened in Berea that was so extraordinary? We see two distinct ways of identifying truth. Many Jews when they heard Paul’s message responded in predictable ways particularly those in Thessalonica:

They sought to shut him up at all costs

The Berean Jews responded in a completely different way. Let’s look to the text to see how they were described. First, they were described as nobler than those in Thessalonica (those who set the city in an uproar and attacked the house of an innocent). Why?

They received the word with eagerness

They believed based on the evidence presented them

Their response demonstrates a high view of truth, of Scripture. Instead of responding emotionally and subsequently working everyone up to a frenzy, they went to the Scripture “to see if these things were so.” They didn’t react prematurely, but they allowed God’s Word to speak to them, even though this truth would have changed the very fabric of Jewish life. The truth is they valued God’s Word over their own comfort, their own traditions.

Do we see anything similar in our own lives? Our country right now is like the first set of Jews. We see or hear something that offends us, and instead of seeking out the truth of the matter, we react emotionally. Christians, apparently, aren’t any better. Because of this, I believe that one of the greatest dangers to our faith isn’t a different worldview such as secularism; the real danger is emotionalism coupled with biblical illiteracy.

God wants us to think things through. When we encounter a situation as serious as the refugee crisis, we cannot just react emotionally. We must search the Scriptures (and more than just one) to find an answer. When someone says or does something that offends us as believers, we cannot react in the mob mentality. We must search for the truth of the matter. We must see through the lens of Scripture how God wants us to respond to a situation.

Our emotions are not a trustworthy guide. Instead, “…test everything; hold fast what is good” (1 Thessalonians 5:21). The rule is that we must first test it then hold fast. My prayer for us is that of Paul’s:

“Father, may their love grow more and more in wisdom and insight—so they will be able to examine and determine the best from everything else. And on the day of the Anointed One, the day of His judgment, let them stand pure and blameless, filled with the fruit of righteousness that ripens through Jesus the Anointed. Phil 1: 9-11 ESV [bold and italics mine]