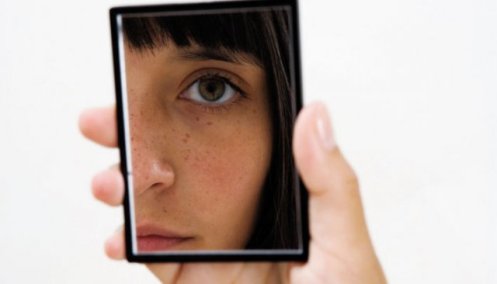 I have spent most of my life having ambivalent feelings towards my body which largely depended on how well I felt it measured up to certain expectations.  As a non-believer growing up, I placed a great deal of my worth on whether or not I was pretty and smart.  Born with naturally curly hair that likes to frizz, I actually had nightmares where I was humiliated because of the ugliness of my hair.

When I became a Christian in college, I was immediately taken with the reality of the spiritual realm.  To me, this made the physical irrelevant and more of a cross to bear in our brief sojourn here on earth.  Many of the authors I read, particularly the heroic missionaries, seemed to echo this same sentiment, valuing spiritual things above physical–some to the point of martyrdom.

For several years, I lived in disdain of physical things–refusing to wear makeup, fasting often, and looking at the world with derision.  However, I found this mindset a bit difficult to maintain.  The body is awfully hard to forget. It is quite demanding in its needs.  I would grieve and moan about the body’s limitations feeling a kinship for Paul who exclaimed, “Who will deliver me from this body of death?” (ESV Romans 7:24)

The problem with this mindset, though, is that our life here becomes an exercise in tolerance (and not in a good way).  I have tolerated my body while waiting for my new body in heaven.  This never struck me as odd, until I joined the launch group for Nancy Pearcey’s new book Love Thy Body.  I have read several of her books before, and her work has challenged and sharpened me.  I expected this book to equip me with a better argument with which to engage the secular worldview in its culture of death and unbiblical sexuality. It does not disappoint in this area.  However, not far into the book, I was forced to confront my own wrong thinking in regards to the body.

Pearcey discusses in detail the mind/body split that has occurred over centuries of philosophical debate.  On one hand, the empiricists have argued that which is known or can be understood is the material world.  There is no spiritual dimension, and nature, including our bodies, are just machines with no meaning.

In reaction to this are the transcendentalists who argued that what is most important is what happens in the mind. Meaning is created individually, rather than as a larger metanarrative or story. Today, in the postmodern view, it is believed that there is no real meaning in the world.  In fact, it is believed that there is no meaning except what is imagined in the mind—with complete disregard for the physical world.  This has been exemplified in the disregard of the physical and biological reality of gender.

Scripture teaches that the creational differentiation of male and female is a good thing.  Our complementary nature speaks of our yearning for union, which in turn reflects the divine nature–a God who is Trinity, differentiated Persons in relationship with one another.  The question is, do we accept that created structure or do we reject it? Do we affirm the goodness of creation or deny it? Do we see the body as a reservoir of meaning, a source of moral truths? Is there a teleology of the body that we are called to respect? Or do we see the body as just a piece of matter with no moral message?

The two camps now are those who value the body and the message it sends, and those who do not. Christian belief uniquely brings two worlds together–body and mind both matter.

However, in the Christian world, we have absorbed this anti-body rhetoric in ways we have not realized. Though we stand in opposition to abortion, euthanasia, and sexual immorality–we do not always clearly articulate why.

As a Christian who has worked in ministry for many years, I know that life is important–I am pro-life and a believer in the sanctity of marriage.  Despite this, I have lived every day in a mindset that is not particularly pro-body.

Pearcey’s questions “Do we see the body as a reservoir of meaning, a source of moral truths?” and “Is there a teleology of the body that we are called to respect?” have forced me to evaluate my own understanding of my relationship with my body.  I do not struggle with gender dysphoria or same-sex attraction, yet I can see there are many ways in which I work against the created world.

One is my attitude towards my body.  I have looked in the mirror only to notice those things that I don’t like.  I have said hateful things about myself.  I have watched myself age with fear and loathing. Another is my attitude towards time.  I have numbed myself with Netflix and Facebook rather than engage in real life.  I have tried too many times to escape. In fact, it was reading Andy Crouch’s Tech-Wise Family that helped me see how often I use technology as way out of interacting with others.

Crouch speaks of living “embodied” lives where we aren’t sucked into the easiness of a technology-driven world, but we spend time doing things, making things, and interacting with others.

This is what it means to live in appreciation of the physical lives God has given us.  It is more than just affirming the right to live and to live in respect of God’s design.  It is also to live intentionally. Instead of begrudging the process of cooking, we can enjoy the steps, reveling in the ability to create a meal.  Instead of being frustrated by the monotonous processes of the day, we can take every moment to be grateful, living with an expectation that God is in even these processes, infusing them with meaning. Instead of hating my body’s imperfections, I can remind myself every day of the wonders of life and movement.  In this way, I can understand what many approaching death or experiencing paralysis or other issues already know–that we shouldn’t take for granted what we have in our physical bodies, especially if they are healthy!

This intentional living could be our greatest Gospel witness.  We will communicate with our lives, and not just our mouths, that this life, this physical being that we are all experiencing, is important.  It’s not random or meaningless, but it is valuable and infused with wonder.

This understanding is necessary.  After all, God promises to restore the heavens and earth, which means our eternal lives will be lived in a similar environment.  Romans 8: 21 says “…creation itself will be set free from its bondagae to curruption and obtain the freedom of the glory of the children of God.”  There is more going on in this present life that is relevant to our eternal state than we can understand.  It is for this reason that we cannot diminish its importance–both in our larger understanding of life and in the smaller, everyday actions of living.

This helps me view my everyday life with new vigor.  I’m not just tolerating this world until I get to the real place.  What I do here matters, how I live is important, and my body is a gift that I should cherish. There are levels of meaning that I have yet to explore, but I now see life as more than repetitive actions without meaning. Instead, I see a world of wonder and an invitation to join something beautiful.