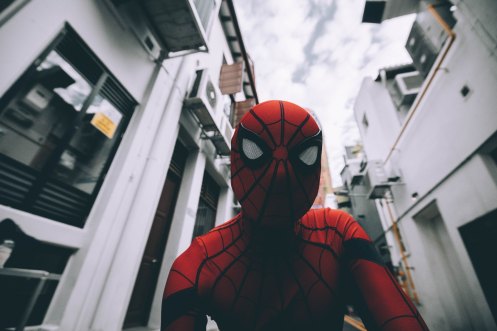 The latest Marvel Universe movie breaks the traditional mold. Though, they keep it light with typical witty banter and comedic interludes, a heavier topic of sacrifice and failure is depicted. Yes, in this movie, the heroes fail. As sad as this is, the greatest tension in the film comes not from its dark ending but from the characters’  struggle with the decision of who is sacrificed for the greater good. *Spoiler alert*

Who Gets to Decide?

The antagonist, Thanos, is the ultimate pragmatist who sees overpopulation as the greatest evil. His plan is to collect the six infinity stones, not just for his own power, but to enact what he thinks is the best plan–to weed out half of the population of the universe and bring balance to the world. He poses himself as a god-like being with fatherly attributes, even calling his followers and conquered peoples, his children. He comforts himself in the midst of evil with the idea that he is doing what is best for the world. Loki’s dying words to Thanos though are “You will never be a god!” It is Thanos’s lack of valuing life that makes him a monster. This stands in opposition to the Marvel superheroes who indeed value life, but whose actions, however,  often imitate, rather than contrast, Thanos’s greatest faults.

This is because the superheroes like Thanos are still the ones who decide who lives and who dies, often based on their own preferences. This is seen clearly in Captain America: Civil War that focuses on the after-effects of two encounters that leave their enemies defeated but many innocent dead. In particular, Wanda and Stark feel the guilt of the lives taken, especially as they learn the names and histories of these victims. The world is tired of this vigilante justice and seeks to place the Avengers under the power of the United Nations by having them sign the Sokovia Accords.

This causes a rift in the team with Stark and others choosing to sign while Captain America refuses. He believes that signing the accords would limit their ability to do good, and he still trusts in his ability to make the right choice.

Aren’t They Doing the Same Thing?

In fact, this trait of sacrificing for others is seen by all the Marvel superheroes. Spiderman decides to stay on the spaceship leaving earth in order to help save Dr. Strange. He comments that he couldn’t be the friendly neighborhood Spiderman if there’s no neighborhood. The snarky Dr. Strange also displays this willingness to sacrifice when, after stating adamantly that he will choose to the protect the stone over Spiderman or Stark, releases the stone to Thanos to save Stark’s life.  As Thor says many times throughout his movies, this is what a hero does. And this is why, despite the ambivalence the people often feel towards their superheroes, they ultimately trust them. They know they will sacrifice themselves if needed.

Despite these noble tendencies, though, we also see inconsistencies in their moral logic. When Vision offers to sacrifice himself by allowing them to destroy the infinity stone he has in his head, Steve Rogers (no longer Captain America) says he won’t trade lives.  Instead, however, an army of Wakanda men and women and other heroes fight the incoming forces in order to buy the time needed for Shuri, Black Panther’s sister and a scientist, to safely remove it. This ploy, however, requires the sacrifice of hundreds just to save Vision’s life, and it ultimately proves useless. Is this a fair valuing of life?

Sacrificing Family for the Good of Others

The Marvel universe is not the only universe to struggle with this balance of sacrifice and life. The great Christian heroes of our past made decisions that brought life and freedom to others but pain and hardship to themselves and their families. Great missionaries like Hudson Taylor, to whom many Chinese Christians can trace their spiritual lineage, often buried wives and children who succumbed to the difficult life. In addition, history reveals stories of great men and women who put their families in peril to rescue others during horrible events like the Holocaust.

These people made a decision of sacrifice that not only impacted themselves but those around them. Did they have the right to make that decision for others?

There is no easy answer to these questions for we know both things to be true: that life is immeasurably valuable and that sometimes we must sacrifice this for the greater good. What we don’t always know is when or how this is required. Any person who seeks to serve God with their lives will feel this tension between serving people and protecting the boundaries of family and self.

What Is the Right Way?

We are all not all called to be martyrs of life or liberty, but we are all called to be willing. In this mindset, we leave room for God to do His work and to orchestrate a plan that might seem nonsensical on this side of eternity, but that we know takes into account the inherent value of every person.  We know in Jesus we serve the one true hero with whom with “whom there is no variation or shadow due to change” (James 1:17 ESV). He is not cold and calculating like Thanos, and he is not inconstant like our loveable Marvel superheroes. Neither Thanos in his pragmatic and selfish vision or the Marvel heroes with their unselfish but inconsistent vision can accomplish Jesus’s redemptive and consistent plan of salvation. This is something no mortal or imagined immortal can ever accomplish, but is the very thing that makes Jesus our penultimate hero and, therefore, completely worthy of our trust.

2 thoughts on “Infinity War and the Value of Life”