Fear drove me to God. It wasn’t fear of Hell or death since they didn’t seem real to me. I was afraid of life. Success scared me because I was certain I wouldn’t be able to keep it up, and failure scared me as the true revelation of my lack of abilities. Though I was only 16 years old, fear completely crippled me.

You wouldn’t guess it from looking at me at that time. I was a straight-A student, clean cut and not making too many horrible decisions. Nevertheless, underneath the surface, I lived in agony of messing up.

I see this same fear in this generation.  As a high school English teacher, I have seen a shift in students who can’t wait to get out on their own to students who are scared to take steps of maturity. A large part of this has to do with our online world where everyone sees our mistakes. The solution to this though is to revive the love of adventure.

There is no better place to begin than with the quintessential tale of an unwilling adventurer —Bilbo Baggins in The Hobbit. Bilbo is quite content in his happy little hobbit hole. He has his food and his routine. Then Gandalf, who sees something in Bilbo that Bilbo would never have imagined, chooses Bilbo for an adventure.  This comes in the way of a motley group of dwarves intent on rescuing their treasure from a dragon. To accomplish this, they need a thief. Bilbo is both mesmerized by their tale and appalled. It isn’t until he overhears them speaking disparagingly about him that his pride is offended.  He tries to prove he would actually be a good burglar when Gandalf steps in saying:

“Let’s have no more argument. I have chosen Mr. Baggins and that ought to be enough for all of you. If I say he is a Burglar, a Burglar he is, or will be when the time comes. There is a lot more in him than you guess, and a deal more than he has any idea of himself. You may (possibly) all live to thank me yet.”

The next day, when Bilbo Baggins sets out on his own “wretched adventure”, he is initially immobilized by his lack of creature comforts.

“I’m awfully sorry, “said Bilbo, “but I have come without my hat, and I have left my pocket-handkerchief behind, and I haven’t got any money. I didn’t get your note until after 10:45 to be precise.”

“Don’t be precise,” said Dwalin, “and don’t worry! You will have to manage without pocket-handkerchiefs, and a good many other things, before you get to the journey’s end…”

The Journey that Transforms

The first few days are quite miserable for Bilbo, but it isn’t long into the journey that Bilbo has an opportunity to prove himself. This is just the beginning though.  Bilbo follows what Joseph Campbell has titled the hero’s journey. This archetype is repeated throughout all the best heroic journeys like Star Wars and Harry Potter. It starts with a call into a new world or journey. As the hero progresses, they find a mentor to help guide them and they face challenges that increase in intensity until they face the greatest challenge of all. A unique part of this journey is the stage titled the abyss. Here the hero must face his or her greatest fear. It represents a testing unto death. It is here though that the true work of transformation occurs resulting in a rebirth. The final stage is the return home transformed. 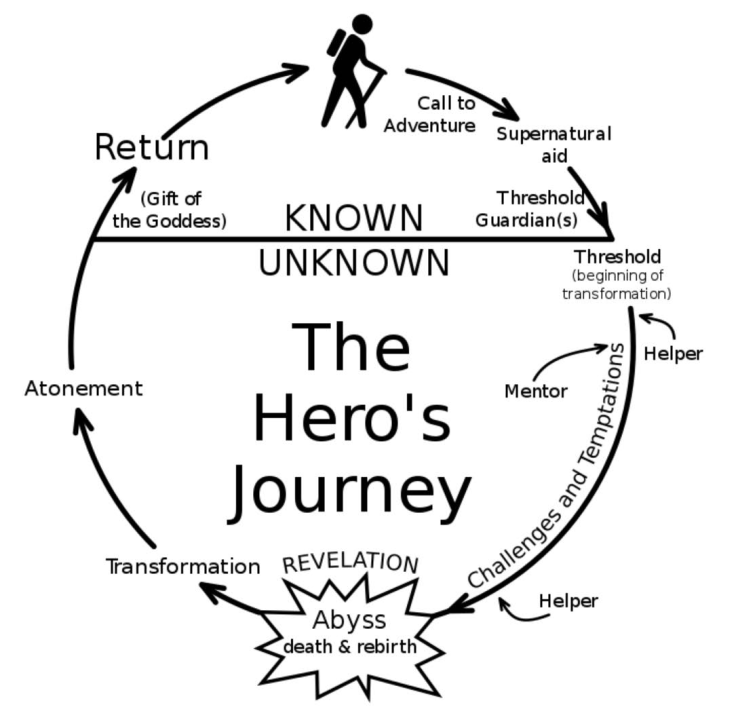 Bilbo’s greatest challenge (abyss) is surprisingly a moral battle instead of a physical battle–he has to choose what is right even though he knows he will be misunderstood. He goes home a changed hobbit–one no longer afraid of adventures and one more confident in himself.

We undergo a similar journey as believers. When we choose to follow God, we make a choice to leave our ordinary lives behind. We might, like Bilbo, be unwilling adventurers, afraid of giving up our creature comforts for the rigors of the road, but we too have been marked by one who knows us better than we know ourselves. We can trust that his choices are correct. We will struggle, but we shouldn’t be afraid. Joseph Campbell notes  “It is by going down into the abyss that we recover the treasures of life. Where you stumble, there lies your treasure.” Our points of greatest challenge are the places of greatest change and growth.

Our journey’s purpose isn’t to rescue a literal treasure from a dragon, but we metaphorically rescue the truth of who we are from the guardianship of the original serpent. Like Bilbo, we must find ourselves in the testing. Bilbo could not have been transformed unless he stepped up to each challenge. We too are invited to a similar battle though ours look quite different. We won’t fight giant arachnids, outwit elves and dragons, or rescue our friends from doom. Instead, we confront our own challenges, handpicked to slough off the extraneous and reveal the treasure within.

If Bilbo had refused to go on the journey, the story would have been completely different. He himself would have remained unchanged, but the lives of those whom he saved would have suffered as a result of his absence. He had a part to play that no one else could play and one that ultimately led to the downfall of Sauron himself. All this depended on his being willing.

Those of us willing to let the journey do its work will have the adventure we were destined for. We must ignore the fear and choose to trust God who has planned it all.  If we do, we also will arrive in our true home, transformed and ready for eternity.