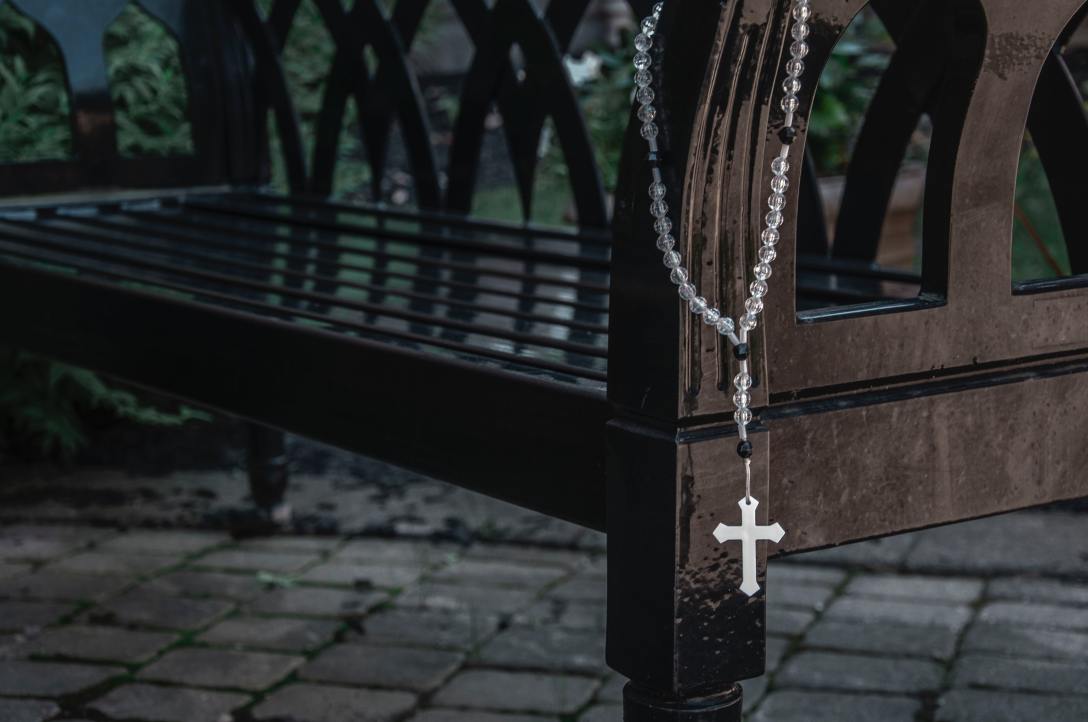 It was stuffy in the little shop but the shade was a nice reprieve from the heavy, unforgiving sun in St. Augustine. My Dad, my sister, and I were exploring the past in the Fountain of Youth park, learning about the early settlers and the Indians they interacted with. The shop was filled with the typical memorabilia of a tourist shop, but it also boasted an assortment of religious items in honor of the faith of those who first came here. I didn’t really have a faith of my own, but I was drawn to the lovely rosaries on display. When we had lived with our mother, a Catholic, my sister and I had been baptized and taken our first communion, but that had been a few years ago. Now our parents were divorced, and we lived with my father who was more interested in New Age than any religion.

Despite my father’s lack of interest, he was willing to buy me the rosary with clear, rainbow-flecked beads. I brought it hesitantly up to the cash register and the lady behind the counter spoke approvingly, her smile pressing her wrinkles together, “This is a beautiful rosary! Good choice.” My dad rolled his eyes a bit, but he still paid for it.  Once back at the hotel, I unwrapped it from the brown paper bag in which it was held. The lady had placed it in a small, black velvet bag. I opened it up, feeling like I was opening a treasure chest, and held it in my hand tightly, hoping to feel something special, to feel something of God.

I was around 10 when this occurred, and while nothing special happened to make me feel like God was near, it was not the last time I would express an interest in His presence. In fact, my teenage years were sprinkled with experiences that would whet my appetite for a short time, even though the results were short-lived.

One experience was triggered by a movie. It wasn’t a religious movie either; the film was Ghost featuring Patrick Swayze and Demi Moore. While the main theme of the movie is the love between the main characters, there is a clear connection made between the choices the characters make in their lives and what happens when they die. In the film, the evil characters were taken by screaming evil shadows most likely to a place of torment. The good characters, like the protagonist, were instead summoned with a lovely, bright light. As a 13-year-old, I wasn’t unfamiliar with this concept—what was new was a personal fear of going to the bad place. I pulled my Bible out, eager to connect with God through another holy item, making sure I wasn’t one of the bad ones. However, the next day dawned without any impending doom, and I was easily distracted from these thoughts.

An encounter with God that had a lasting impact was also attached to an item; however, this wasn’t a traditional holy relic. Instead, it was the written testimony of a famous preacher. The story of his life-altering encounter with God captured my imagination and heart. I realized that what I craved was something larger than myself, something that couldn’t be taken away or forgotten.

I realize I have a tendency to go to physical items to find God, which I don’t think is wholly bad given that physical reality is God’s handiwork. He often uses the physical as a doorway to the unseeable heart of God. We are called to live in this in-between, cherishing the physical while it fades and investigating the spiritual as it unfolds before us. We are people of two worlds right now, but their inter-connectedness displayed by God’s own physical arrival, let’s us know He is closer than we think.

I found that rainbow-flecked rosary several years later where it had lain quietly dormant in my jewelry box. At the time of my reconnection with the rosary, I was no longer actively interested in spiritual things, though the rosary sat as a reminder of what was to come. It was one of many encounters that I had throughout my childhood and adolescent years that pointed the way to a relationship with God. I am so very grateful for each one and even more grateful that He continues to show up in my life in unexpected ways, reminding me that He is near.

Photo by Maria Oswalt on Unsplash